Warmer temperatures may extend our growing season, but animals and crops may not respond well. Unfamiliar pests and diseases may spread into our region, such as deer ticks and Lyme disease. The maps below show the average temperatures for New Brunswick in the past and potential increases in the future. 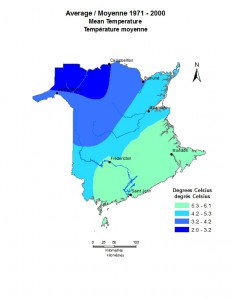 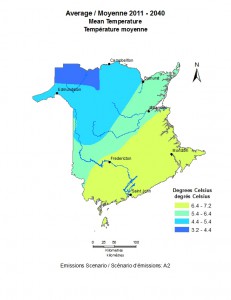 It flooded low-lying areas and overtopped the dykes by about 0.9 m. The following are accounts of the aftermath on the Tantramar Marshes.

There was fearful destruction of property all through the New England states … doing great damage to the Sackville Marshes, and also all of the Bay of Fundy coast; destroying hundreds of tons of hay, washing away cattle of all descriptions, horses, oxen, sheep and pigs. Barns full of hay were taken on the water for miles. Sunken

Island was literally covered with haystacks, cattle, sleepers, fences, telegraph poles, gates, boards, and numberless other articles, used by farmers on the marsh … In the morning all was quiet but rather foggy; the farmers looked towards their marshes in silent amazement.   Source: W. K. Bowser diary in the Mount Allison Archives

Barns and even small schooners were driven up on high land and dykes were torn down in all directions, necessitating a heavy expense. Farmers lost nearly all their hay which was in stack (there being few barns on the marsh at that time) along with cattle and sheep pasturing on the marshlands. One particular incident happened in which a mare and her nursing colt floated on a haystack bottom across the Bay of Fundy to Rockport, alive and well. With extra work and expense, the farmers got the dykes rebuilt and gathered enough hay to get through the winter and stock came out well. Source: http://heritage.tantramar.com/WFNewsletter_10.html

A more recent storm occurred on April 3, 1962. After heavy rains, Sackville was impacted by severe fresh water flooding. The height of the flood was estimated to be 8.0 m. Lorne Street in Sackville was completely flooded from the CN Station to Bridge Street. At Black’s Hardware Store (now Bowser’s Construction Ltd.) the water was over a metre deep. 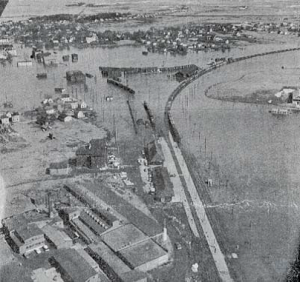 Extensive flooding in Sackville in April 1962 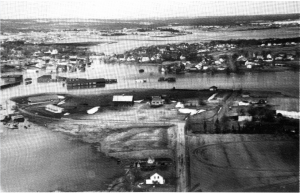 The graph below shows the frequency and intensity of hurricanes and tropical storms to hit the Tantramar area since 1900. In the last decade there have been several serious storm events in the region. Storm surges often accompany these events and can cause considerable damage. For example, two storms hit Port Elgin in 2010 with extensive damage estimated to be around $900,000. 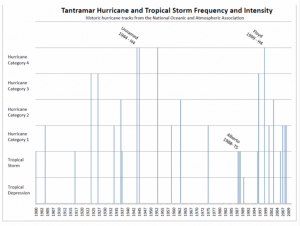 A 100-year storm (1:100) is severe and will cause major flooding but it is not a storm that occurs every 100 years. It is a storm that has a 1% chance of occurring each year. So it is rare but it could occur every year. Similarly, a 10-year storm (1:10) is less severe and has a 10% chance of occurring each year. A 5-year storm is much more likely to occur each year, but could also occur several times a year. Climate change is causing more severe storms to happen more often.

Sea levels are rising because of:

•          Expansion of warmer water molecules in the oceans

Coastal lands are sinking because land in the middle of the continent is still in a process of rebounding from glaciers that retreated after the last ice age approximately 10,000 years ago. This has gone on for thousands of years, and is not related to today’s climate change, but this very slow continental movement will worsen the impact of storm surges and sea level rise for coastal communities. 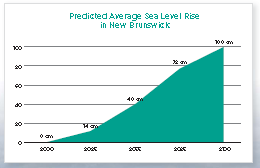 Sea levels are predicted to rise in the future

How Much Will Sea Level Rise in New Brunswick?

What is a storm surge?

Storm surges are usually caused by low pressure and are an increase in the tide level compared to what was predicted. New Brunswick coasts most often feel the impacts of storm surges during powerful late fall and winter storms, and from hurricanes. Storm surges are worst when they coincide with high tides. Because of sea level rise, worst-case flood levels could happen much more often.

Like rising global temperatures, sea levels have been rising for a long time too. The graph below shows how the ocean level has been rising at Saint John since 1939 (when measurements began). 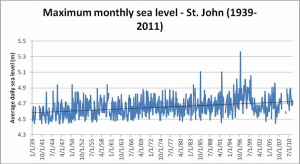 The sea level is rising around New Brunswick

Find out more about sea level rise, check out these studies:

Sea-Level Rise and Flooding Estimates for

Sea Level Rise and Flooding: What they Mean 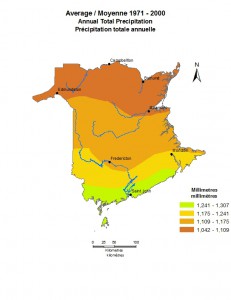 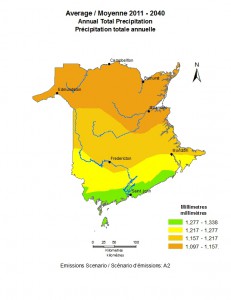